Anyone can follow when we speak about a 'thing,' whether the thing is a tangible object or an intangible 'something.' In contrast, the word ‘nothing’ indicates to us the absence of a thing.  That means we understand 'nothing' only in relation to 'something.' But what is 'nothing' actually? How does one define ‘nothing'?
Wenner Gefter, a Radiologist and a Zen aficionado, throws this question as a challenge to his teenage daughter, Amanda.
Thus starts an interesting saga of a father-daughter duo in finding out “the meaning of nothing — and, by extension, the secrets about the origin of the universe and whether an observer-independent reality exists.” Helpfully, Wenner defines “nothing” as an "infinite, unbounded homogeneity," similar to what Advaita would say brahman is. How can something like a world with a form evolve from such a ‘nothing’?
Wenner and Amanda begin their quest with an inspiring interaction with the legendary Physicist Prof. J.A. Wheeler. They pour over through his highly insightful diaries and also interview many of leading Physicists for possible answers. They attempt to understand the highly complex modern developments in Particle and Theoretical Physics as well as Cosmology in terms of simple physical models by providing flesh and blood to the dry theories of the specialists. “Trespassing on Einstein’s Lawn” (Bantam Books, 2014, pp: 419) is a record of  their  discoveries  penned  by  Amanda. Some excerpts from the book follow: 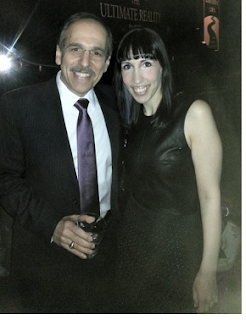 You can get something from nothing. Because, in a way, the something is always there. It’s like if you build a sandcastle at the beach and then knock it down – where does the castle go? The castle’s ‘thingness’ was defined by its form, by the boundaries that differentiated it from the rest of the beach. The castle and the beach, the something and the nothing, are just two different patterns.
***
John Wheeler suggested that the very posing of [a] question creates a bit of information, and that such bits were the fundamental building blocks of reality. “The universe and all that it contains (‘it’) may arise from the myriad yes-no choices of measurement (the ‘bits’),” Wheeler wrote, “Information may not be what we learn about the world. It may be what makes the world.”

If measurement built the universe bit by bit, as Wheeler suspected, then observers somehow implicated in the creation of reality – a radical picture that, if true, would mean that ours was a participatory universe. As the Physicist Paul Davies wrote, "Wheeler seeks to... Turn the conventional explanatory relationship: matter -> information -> observers on its head, and place observership at the base of the explanatory chain: observers -> information -> matter.”
Warren Gefter: If observers create reality, where do the observers come from?
John Wheeler: From Physics. From the universe. I like to say that the universe is a self-excited circuit.
***
Is the objective world the ultimate reality, independent of observers? Is the world “out there,” as it exists in and of itself regardless of how we perceive it? The answer has proven far thornier than one might think. In the early 20th century, Einstein found that space and time were not fundamentally real but are observer- dependent. The founders of the quantum mechanics were coming to grips with the realization that observers play a far more profound role than anyone had imagined. But what few people knew is that in recent years, things have gotten a whole lot weirder. Today, cutting-edge physics is forcing us to completely rethink the nature of reality and our place in the cosmos. In studying the physics of black holes, physicists have found that particles are observer dependent; in exploring the consequences of the holographic principle they have found that even 4-D spacetime – which has been left intact by Einstein’s theories – is also observer-dependent, introducing what Leonard Susskind has called “a new kind of relativity.”
Space, time, gravity, particles, spacetime, dimensions, the gauge forces, strings – all would inevitably and profoundly turn out to be observer-dependent Boojums, culminating in a total rethink of cosmology itself.
These are the conclusions that boggle the mind. The things we have long believed to be the most fundamental features of reality have turned out to be nothing more than mirages. One by one we see that the seemingly solid building blocks of the universe are consequences of our own point of view – and that the universe itself is a strange kind of fiction. It seems the more deeply we look into the nature of reality, the more clearly we find only a reflection of ourselves.
***
We are stuck inside the universe – which means we can’t give a consistent description of the universe without also describing ourselves. But Godel’s theorem showed that self-referential statements can’t be proven from within the system that’s stating them. In physics “proven” means “measured,” and measurements are about gathering information.  The Godelian incompleteness of the universe seemed to place fundamental limits on the amount of information we can access. If self-referential statements can’t be proven by physical measurements, then observers can’t measure themselves.
As Rovelli had confirmed, “the whole relational view [of quantum mechanics] is somehow related to the impossibility of total self-measurement. The entire structure of the quantum mechanics tells us that our information is always limited.”
In relativity, the finite speed of light, long believed to be infinite, rendered space and time observer

dependent. In quantum theory, Planck’s finite constant was long held to be zero; it rendered all physical features connected by uncertainty relations observer-dependent. Most recently, the discovery that the entropy of a region of spacetime, which everyone had assumed to be infinite, was actually finite, made spacetime itself observer-dependent. The speed of light, Planck’s constant, entropy – they all represented nature’s most fundamental limits. The limits were the clues. If we could find the limits, we could find the reality. Or the lack thereof.
***
We never see simultaneously-alive-and-dead cats because superpositions represent a multiplicity of points of view, and, by definition, a given observer has only one. … And the key thing was that if reality weren’t observer–dependent, we wouldn’t see interference. Interference, the physical manifestation of non-Boolean logic, exists because nothing is real or because reality is nothing.
Physics is now telling us that we can’t talk about yes/no truth assignments (based on Boolean logic) at once. They are non-commuting gauge copies. As Susskind had said, it all came down to the misuse of the word and. Not dead and alive.  It is dead or alive. “Quantum gravity may not admit a single, objective, and complete description of the universe,” Bousso had written. “Rather, its laws may have to be formulated with reference to an observer – no more than one at a time.”
***
[A state of infinite, unbounded homogeneity – otherwise known as ‘nothing’] couldn’t change because it has no outside. But here on the inside, it could appear to change, as if something is just what nothing looks like from the inside. Here on the inside, with a finite speed of light, observers can’t see the whole thing. Their perspective is bounded. But when you put a boundary on the [nothing], it’s no longer the [nothing] state. It’s something.
Consider whatever you want, like color, a form, an object, a mass, a particle, and put yourself into it, in the interior of the thing, then the thing disappears. In the color there is no color …. What makes the color is the wavelength. If you are smaller than the wavelength, the concept of color does not even exist. It disappears completely. If you are in light, participating in its motion, light and time disappear (this is what Einstein understood when he was fifteen). Therefore, in motion, there is no motion, in position, there is no position, in particle, no particle.
***
From my point of view, the light leaving a star 5 million light-years away takes 5 million years to reach my eye. But from the light’s point of view, its journey is instantaneous. From the light’s POV, the speed of light is not the speed of light. It has no speed. It is everywhere at once in a single instant. A photon doesn’t see the universe. A photon sees a singularity.
***
Here’s the reality test. If you can find one frame of reference in which the thing disappears, then it’s not invariant, it’s observer-dependent. Nottale had pointed out the one frame in which the speed of light disappears: the frame of the light.
***
Now I was beginning to understand what information really was: asymmetry.  To register a bit of information, you need two distinguishable states: black or white, spin up or spin down, 0 or 1. You need twoness. After all, entropy was a measure of missing information, and with entropy comes symmetry. A smoothly distributed gas, the epitome of high entropy looks pretty much the same everywhere – it’s highly symmetric. And what is symmetry? It’s redundancy of description, a redundancy of information. The [nothing] state is a state of perfect symmetry, which makes sense considering it was nothing. So how do you get information from the [nothing] state, turning nothing into something? You put a boundary on it. The boundary breaks the symmetry, creating information. But the boundary is observer-dependent, and so is the information it creates.
***
The message was clear: having finite frame of reference creates the illusion of a world, but even the reference frame itself is an illusion. Observers create reality, but observers aren’t real. There is nothing ontologically distinct about an observer, because you can always find a frame in which that observer disappears: the frame of the frame itself, the boundary of the boundary.
Spacetime, gravity, electromagnetism, the nuclear forces, mass, energy, momentum, angular momentum, charge, dimensions, particles, fields, the vacuum, strings, the universe, the multiverse, the speed of light – one by one they had been downgraded to illusion.
***
Physics isn’t the machinery behind the working of the world; physics is the machinery behind the illusion that there is a world.

Fascinating read, ramesam,especially the last line. Thanks very much!

Thank you very much, Sir.

its not easy to understand the lines unless one is a meditator and feels the lines :)

Thank you Ramesam, this was insightful. Loved especially the one about breaking symmetry, and the non specialty of any POV, leading directly to perceive Maya in operation.

>Warren Gefter: If observers create reality, where do the observers come from?
John Wheeler: From Physics. From the universe. I like to say that the universe is a self-excited circuit.


That's a bit of a vague explanation.
If the observers come from the universe, wouldn't that mean that the universe is "out there,” and exists in and of itself? Even if we aren't capable of making  any statements about it? Or can't we even tell that for sure? On the other hand, "circuit" would imply that there is no such thing as a first cause, so perhaps our perception that we are separate from the universe is just a illusion  too?

Thanks for this article, however. If one ponders about these questions too long, it can give real headaches...