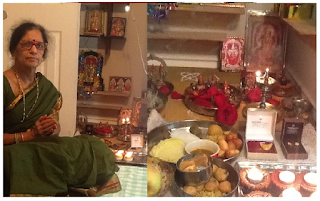 (i) In the initial phase in disciplining the mind and sharpening its focusing ability so that it can be made mature and fit to carry out an incisive and unbiased Self-inquiry;
(ii) At a post-enlightenment stage to stabilize oneself to abide "as brahman" without break. bhakti helps in restricting the habituated mind to returning to its ways of reacting like a separate entity.

If the mind feels too agitated or disturbed also, bhakti can be used to calm it down and bring it back to the brahman-thought.

There will be situations where the mind has no work. Then the seeker can think of a favorite god and keep praying to him and thus keep the mind occupied.

(iii) After liberation bhakti may also be useful for a jIvanmukta.

The situation described here is, strictly speaking, not about the seeker. It is about the body that previously housed the "now liberated seeker."  The body of the seeker who successfully went through the preparatory drill (called sAdhana catuShTaya sampatti - the Fourfold Aids of Seeking), is already re-orientated in its behavior, responses and interactions (no greed, avarice, no  immoral thoughts/actions etc. etc.). It is now well-disciplined with no desires and acquired a pious code of conduct. It is filled with dispassion and detachment. But there is no more any finite individuated person who claims it as "me or mine" to perform motivated actions. Still that body has to live until it perishes in its own time. It has no goal or target to achieve in this world.

What will it do? It will continue to carry on the same way of living that it got used to before the enlightened "owner" left it. (speaking figuratively). 'bhakti' towards a Godhead is quite handy for such a body which formerly housed the seeker who was seeking. The body spends its time in symbolical surrender to that nirguNa brahman, praising and singing hymns in Its glory in diverse saguNa forms. This is what we see in the lives of people like Shankara, Nisargadatta, Ranjit Maharaj and many other realized people, IMO.

***
For "understanding" the actual reality, devotion (any sort of master-slave relationship) can be a detriment. Because there is a danger of the disciple becoming too dependent on and attached to his object of devotion (deity, guru, scripture, mantra etc). Moreover, 'liberation' will not come as a result of any action "done." Shankara defines devotion as " The seeking after one’s own real nature is designated as devotion. Or The inquiry into the truth of one’s own self is devotion"  in Vivekachudamani (verse 31-32).

In spite of the above limitations, one can use "bhakti" to train one's mind in feeling "Oneness" with all.

Some people are more emotional in nature. They like devotion and they have a tender nature, more kindness etc. They do not like to be too analytical.
These type of people can like and love others easily. They also like to have a Godhead to believe in as a protector, guide and so on. A loving devotional approach is good for them.

Some other people are too analytical, questioning everything and they like to argue and debate on each point. They cannot like and love everyone unless they are like-minded. So this type of people feel more at home with   a logical approach.
Actually it DOES NOT matter which approach one takes.
In both cases the MAIN POINT OF ADVAITA TO BE UNDERSTOOD is that :

"I am not just this body and mind;
I am not a distinct and separate individual who lives in a world with others also living in it.
That means to say that I am everything and everyone I perceive.
There is no world or any "other" which is not me.
In other words What-IS is all ONE."

1.  Is bhakti just as valid as the path of knowledge?
Bhakti will take you a long way, no doubt.
In the very last stages of bhakti, one comes back to the Knowledge. But at that stage, it makes little difference whether you call it bhakti or knowledge.

2.  How do chanting, singing and other bhakti practices, including karma yoga to the deity connect to taking one's stand as Awareness?
All such activities train the mind to be calm, kind, compassionate and less and less oriented to taking the interests of one's own little 'self.'
A person becomes more considerate, and helpful to others.
Such attitudes helps in reducing the difference of "me" from "other."
It thus helps to more quickly fell the absence of differences and feel Oneness with all.
Otherwise, it is more difficult to break the walls of separation between me, my property, my image, my family and "others."

3.  Could you please shed light on the same?
Bhagavad-Gita and Upanishads also say that you can worship and pray to a god form.
Our mind is comfortable to deal with clear shapes and well defined objects.
It cannot imagine, for example, a thing without any dimensions. Your mind can think of very very minute size - like a subatomic particle. Or it can think of a huge galaxy of stars.
But try and think of dimensionlessness, or a thing which has no qualities.
Or another example.

Think of "Gold." Just gold but not in the form of an ornament, or nugget or lump or even with the colors of yellow etc. Can you think?

NO.
Therefore, it is much more  difficult, no, it is impossible for the mind to think of brahman.
Hence, it is good practice to think of a great God, all his good qualities, think of him as your protector and helper. Do all things in his name, as an offering to him.
The Upanishads say that that God form will help you. How?
After all, every god form is a force. Like a boson. Your mind will know by worshiping that god form (force) ways to use that force even without your conscious knowing. So the mind will get to take help of that force and act with its help. That power will then take you to its place (abode). There you will get further instructions in an easy way about reaching brahman.
All this is said in the Upanishads.

4.  The purana-s say chanting is the best form of practice in kali Yuga. Could you please comment on that?
Chanting is the easiest way to keep continuous touch with the force of your choice (God form).
It can be done at all times, places and just in your mind. No elaborate procedures, instruments, coconuts, mantras etc. etc, are necessary. You will always be in touch with the chosen force.
The force itself will take over the control about how you behave and act. It will help you in breaking the walls of separation between you and the world and feel Oneness.

You may like to see the 2-part Blog Post here:  “The Two Courses to Advaitic Truth – Part 1 and Part 2.

And Also "On Narada Bhakti Sutras – 2" (Discusses how a Devotee approaches the deity in devotion)
Posted by Ramesam Vemuri at 10:48 AM 1 comment: