Meditation - The Paradox of Practice by Kentaro Toyama

Meditation - The Paradox of Practice
by Kentaro Toyama
[Dr. Kentaro Toyama is a Computer Scientist and presently the W. K. Kellogg Associate Professor at the University of Michigan School of Information. He is  a fellow of the Dalai Lama Center for Ethics and Transformation at MIT, and author of Geek Heresy: Rescuing Social Change from the Cult of Technology. He has some experience with Zen practice mostly in the Rinzai tradition.
Kentaro delivered a TEDx talk in Tokyo in May 2010. He maintains a Blog and Web site where his Contact details are available.  I am grateful to Kentaro for this very enlightening contribution to our Blog and I am sure all our Members will find  it quite interesting -- ramesam]

Meditation - The Paradox of Practice
by Kentaro Toyama


When Hongren, the Fifth Patriarch of Zen Buddhism was looking for a successor, it’s said that he held a poetry contest to see which monk had the best understanding of Zen. Initially, only the senior monk Shenxiu dared to submit a poem:
The body is a Bodhi tree;
The mind is like a mirror
Always strive to polish it –
Let no dust alight.
Most of the other monks ooh-ed and aah-ed over this concise statement of the Zen exhortation to meditation. But when the illiterate, low-level monk Huineng heard the poem, he offered a different understanding:
The Bodhi has no tree;
The mirror has no stand.
In essence, there are no things.
Where can the dust alight?
The Fifth Patriarch Hongren recognized Huineng’s superior understanding of Zen and passed his robe and bowl to Huineng, thereby making him the Sixth Patriarch.
At least, that’s how the story goes. It is one of the best-loved stories in Zen Buddhism despite its dubious historical authenticity. The tale is told and retold in Zen books and by Zen teachers. For me, though, the anecdote captures one of the most vexing contradictions of Zen – an issue which I also see frequently in discussions of Advaita and non-duality. The question is this: Does meditation help lead to Awakening?

On the one hand, Huineng’s response seems to say that meditation is a second-class activity that has little to do with Awakening. On the other hand, Zen practice is dominated by meditation. The word “Zen” itself (via Chinese “Chan”) is a transliteration of “dhyana” which is typically translated into English as “meditation.” So again, Should you meditate in order to Awaken?
Seasoned thinkers about non-duality – and I use the word “thinkers” very deliberately – often pile on with a range of well-worn answers to this question: We are already Awake, so it is pointless to try to do anything special such as meditation to achieve it. There is no person who Awakens, and there is no person who meditates. And, many people who have tasted Awakening seem to recant their previous practice. The brilliant Zen master, Rinzai, for example, said, “When you look for it you go further from it, when you seek it you turn away from it all the more.”

At first blush, these comments seem to say that there’s no point in taking action toward Awakening. They seem to suggest that meditation itself is a waste of time. But there are plenty of other pointless activities, so why are meditation and its variations given special status in most mystic traditions? Obviously, there’s something unique about it.  Zen almost revels in this paradox – maybe the point of meditation is that it’s pointless.
I’m a strong believer, however, that most of the supposed logical contradictions of Zen are readily explained by relative explanations. I – the relative “I” – am by no means Awakened, nor have I ever experienced the universe as One or All or Zero. Yet, what I understand through my rational mind is sufficient to explain in purely relative terms why meditation increases the likelihood of Awakening, and how best to interpret the seemingly paradoxical advice not to strive for Awakening. I’ll use two analogies.
The first is an analogy of Awakening with the ability to play a difficult piece of music or to master a challenging sport. Both activities require years of practice to achieve mastery and facility, and notably, practice is different from theory. I could study music theory, commit musical scores to memory, and read every book there is on piano technique, but none of that would get me closer to being able to play a Beethoven Sonata. Nothing short of years of practice will get me there. The same is true for boxing. No amount of intellectual knowledge of the sport can ever replace the need to practice jabs and hooks over and over and over. Sure, by reading books about boxing, I can learn descriptions of proper form and tactics against an opponent, but that kind of factual knowledge is different from the knowledge that comes with years of practice.
And the same is true of Awakening. It’s possible to have an intellectual, fact-based knowledge of it that can be read in books or blogs and recited by mouth. My rational mind can understand that “I” am simply present experience or consciousness; that the sense of a person with a timeline and a physical body is itself just another experience projected by this brain; and that for any given instance of experience, only that experience exists. But none of that is Awakening – the intellectual knowledge isn’t the same as the special configuration of neurons and synapses in which the brain stops discriminating and stops projecting the separate sense of “I.” The former type of knowledge is factual and can be learned through books or conversation, but the latter type of knowledge requires a re-jiggering of brain matter that comes best through practice. (Or occasionally, luck – once in a rare while, a monkey at the keyboard will hammer out a Bach Minuet; and once in a while, a person has an Awakening experience without explicit practice.) Increased practice makes one more likely to achieve the relevant state of mind. That elusive thing called grace comes more often to people who have practiced. As Louis Pasteur once said, “Chance favors the prepared mind.”
So far, so good, but there’s at least one way in which the meditation-as-skill analogy falls short. Whereas musicianship and athletic ability are acquired skills, Awakening seems to be the unacquiring of a skill. In an absolute sense, we are all already and always Awakened, but our relative brains have learned a habit of constantly generating discriminating thoughts that distract us from Original Experience. In other words, the brain needs to unlearn a habit that it has spent a lifetime acquiring. It’s like trying to relax a permanent muscle spasm.
﻿ 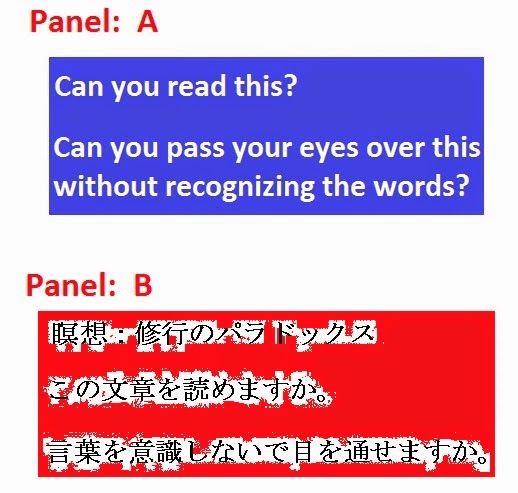 That brings me to the second analogy: I suspect that the unlearning needed for Awakening is some generalized version of unlearning how to read. Those of us who can read fluently cannot easily suspend the reflexive association we make when we see a written word. Immediately, a concept and a   pronunciation come to mind. It’s all but impossible to see text in our own language as the meaningless collection of lines and curves that it actually is. (Try it with these words (Panel - A)! Thoughts and subvocalized sounds come to you unbidden before you have a chance to suspend them .) Yet, we know that as children, it took us great effort to learn to read; and, we can still recapture a sense for the original mystery when we see foreign scripts (Panel - B). ﻿﻿
The question of how to come to Awakening, then, is similar to the question of how to learn to not read. Some kind of practice is required, even if it is to unlearn something that we once had to practice to learn. It might even be, actually, that a very similar practice works both for Awakening as for unreading, involving an attempt to suspend discriminatory thought. (In fact, I would be curious if people who have had Awakening experiences found in those moments that text went back to being mere scribbles. And if it didn’t, doesn’t that mean discriminatory thinking was still happening?) ﻿﻿
So where does that leave us with Huineng? Both with playing the piano and with Awakening, over-thinking and over-stressing can be an impediment to the goal… but only at advanced levels of practice. In music, after one has put in the requisite practice, the overly self-conscious thought, “I must play well” can interfere with a performance. Similarly after one has put in the requisite hours of meditation, the overly self-conscious thought of trying to achieve Awakening is probably an obstacle. In both cases, though, any advice against practice or conscious thinking applies only after sufficient practice has been undertaken. If one has never practiced the piano, not thinking about playing well won’t make one a virtuoso.
To be fair to old masters, it’s worth remembering that they didn’t expect their teachings to be widely disseminated. In Zen, training methodology was often kept a secret because teachers tailored their teaching to each student. A story that might help one student might not be appropriate for another. What I understand of the various prescriptions “not to try” is that they were directed at advanced students who were already at a reasonably accomplished level of meditative practice. For them, it must have helped to be told to stop trying so hard, just as a coach might tell a boxer not to overthink it in the ring. But for someone like me, I would have to do a lot more meditation before I’m ready for the advice to “stop trying so hard.” Putting the lesson in its full context: If you haven’t yet practiced a lot, practice hard; but if you’re hitting a wall after lots of practice, maybe you should relax a bit; stop trying so hard; try not to force it; let it come.