[Basil Hiley, David Bohm’s longtime collaborator and co-author of his final book,The Undivided Universe is a theoretical physicist at Birkbeck College of the University of London.  Reproduced below are a few excerpts from an abridged transcript of his chat in 2013 with Dr. George Musser of the Scientific American. Sourced from here – ramesam]

We were interested in undivided whole. How do you describe wholeness without breaking it up into pieces? Bohr said you can’t analyze any further: don’t make the division between the subject and the observing apparatus, because everything is a whole, and as soon as you break it into pieces, you’ve lost it; you’ve changed the phenomenon. I took a lot of insight from Bohr. If you read our book, we never say Bohr was wrong, whereas most other people say Copenhagen is nonsense. What we disagreed with Bohr about is that he couldn’t analyze it further. What we’ve been trying to do is analyze it further.
Our idea was to say, yes, you can do it. You can talk about the individual, but it’s the quantum potential which puts in what you’ve left out. So it brings the information of the environmental conditions, the boundary conditions, and feeds it to this local entity–so this local entity knows that it’s part of the whole.

Then, of course, they thought we’d gone mystically East. But I mean the quantum potential is not a classical force. It’s not a classical potential. It’s something extraordinary, very strange. It doesn’t get propagated, as far as we can find out. But that was the way I reconciled wholeness with divisibility. If we divide, we must have something to put it all back together again.

**
Nature is more organic than we think it is. And then you can understand why life arose, because if nature is organic, it has the possibility of life in it.
Let’s start this way. You’re looking for a fundamental particle. So you divide the material into atoms and think: this is where the real essence lies. Rutherford divided the atom and found the nucleus. OK. The nucleus is where matter resides. And then you look inside the nucleus and you find neutrons. OK, now we’re there. But then there’s quarks and we’ve never got a hold of a quark. We take a proton, an anti-proton, and it goes, poof, into radiation. So where is the solidity of matter? Where does it lie? Because wherever we look at it … [it falls through our fingers.]

Suppose we start with something likeprocess–no particles, just activity, just energy. Then the first battle was: what the hell do you mean?
I started reading. I read Grassmann, for example, and Grassmann was saying that mathematics was not about things in space and time, but it was about thought–it was about the order of thought. And he obtained his Grassmann algebra from that kind of consideration. And I readClifford‘s original books, original papers, and it was all about process. Two times three is equal to six–it’s not two objects times three. It’s the doubling of three objects. It’s a process.

We’re not used to thinking about process. We communicate with an object-based language. David invented a thing called “rheomode“–language in which we speak to each other in a flowing mode. There are some ancient languages which do this–Hopi Indian and some others. In his book Wholeness and the Implicate Order, you’ll find a chapter on language, in which he discusses this rheomode. It didn’t work, because we were still thinking of objects.

Every day in our life, we always have to be careful of the order. You’ve got a cup in the cupboard. You’ve got to open the cupboard door before you can the cup out. All our experience is doing things in the right order, so our activity is noncommutative. It comes into quantum mechanics because Heisenberg sought to explain atomic energy levels and what he found was he had to make his objects into things that didn’t commute with each other. The order was vital. There was a difference between first measuring the momentum and then measuring the position, from measuring the position and then measuring the momentum. That became the basis of his Uncertainty Principle.
It seemed to me that he was actually discussing a process. He was talking about how something goes from one to the other, and he called that a momentum transition, and a position from one position to another.

You’re creating your space and time, People say, “Well, what do you mean we’re creating space and time?” Well, the world out there, there’s not a geometry which you somehow just discover by looking at it. You actually use physical processes to describe that geometry. How do we get the geometry of space? With a radar set and a clock. We send the light signal out, send it back again, and we construct the Lorentz transformation by what matter is doing.

Why would we expect the fundamentals of nature to be the same as we experience in the macroscopic world? This idea is to say, no, the real world is not. If you look behind it, it’s a mirage in a way. The algebra is the implicate order. It’s the structure that’s there. Properties are given by the whole, but we’re taking them out and we are making an explicate order.

[The explicate order is what we perceive.]

And it’s not everything. What the old classical physics said was that we just want to stand god-like outside and just look at everything without us being in there. We can’t. We’re in there, whether we like it or not. We’re inside looking out, not outside looking in. What the implicate is, you can’t explicate, but you must have different views because you’re inside it. You can’t stand outside it. You only get a partial view. 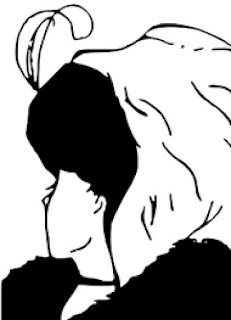 When I lecture on this, I always use the old lady/young lady–the gestalt. The lines are there, but what they mean depends how you explicate one order over the other. Because a lot of things are based on things that you can’t explicate at the same time. Nature is such that you cannot actually explicate the position space and the momentum space.

[One shouldn’t think of this particle as a persistent entity drifting through a void?]

Do we create what we see? Maybe we do. I know people say, “Oh, it’s all subjective.” But there are only certain things you can do with it. You can’t magic things up. You can reorder things. You can rearrange things when you are making your reality. We’re rearranging the processes. We are part of the process.
Posted by Ramesam Vemuri at 6:00 AM No comments: