Up The Creek With No Canoe By Elena Romanoff

[Elena is an accomplished concert pianist by education and training. Her life took a new turn when she listened to UG's dialogs.  After 30+ years of being a pianist she no longer practices or plays piano and hardly even listens to the classical music which was her field of expertise. I am grateful to Elena who has been kind to share at our Blog a few tidbits of her experiences - ramesam.] I never looked for any moksha, liberation and yet what Ramesam describes….., it hits home every time. I first come across something extraordinary for me and then some time later an explanation comes from unexpected sources.

Not only I have not realized at that time that I am "realized," I didn't even stop to notice all the bewildering phenomena that started leaking into my daily life seemingly out of nowhere, creating symmetrical events that were intertwined also with dreams. And also having recognition of this same thing permeating my earlier life, but without recognition. Now I see it. Knowing that I was not likely to find a satisfactory explanation for those, I never asked or mentioned it.

I now witness the world as if my mind itself is symmetrically  shaped.  Earlier, there was a me, a dog, a cat, a president out there - all standing on their own. Now the feeling is we are all drawn in one stroke by some giant pencil that never ever was taken off paper at all. And I see symmetrical events appearing almost daily. People, fabrics, buildings, cars, jobs, actions of myself or others, photographs, plants, all intertwined, often in the funniest of ways, logic-forgotten and irrelevant. It is totally bewildering.

My life began immersed in music and piano. I was called a "prodigy," a "talent," was accepted into one of Russia's most prestigious and rigorous music schools of the time. Later I delved into philosophy as well. 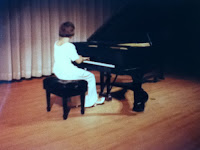 I did a lot of reading all by myself. I liked solitude, reading, playing piano. I did have friends and was highly secular and social, partly due to constantly performing.  From Kant and Schopenhauer to Goethe, Metherlink to Thomas Mann, to even Marx and Lenin - my reading was paramount. I was not satisfied. I never thought of looking into bible.  There was no bible in Russia. Later, when I could look into it, I experienced complete aversion, closed it and never went back to it.

At some point in the 90's, I read Bhagavad-Gita and Mahabharata, because someone put these two books in my hand. I think I got rather deeply impressed; I even went to a couple of Hare Krishna's meetings, appreciated what was said there, declared to my parents that Krishna alone was God. That unsettled them terribly. God was never talked about in my family, not at all. But nothing happened, life went on, nothing developed into anything.
I immigrated to US in 1993 after the collapse of the USSR. 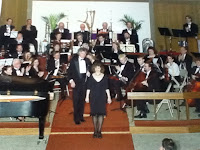 I had my share of difficulties before establishing my piano studio, launching on a lucrative teaching career, performing, working in UW School of Music, recording, playing with orchestras etc. I was a busy piano teacher with a lot of students, bringing up my son from first marriage, divorce from the second husband etc. During that time, I came across UG Krishnamurti's video. I picked it up in a library thinking that it was another Jiddu Krishnamurti talk.

Making long story short, 11 years of listening to UG's every word followed, internalizing it and holding up to it all the daily events like a cashier might hold to light a $100 bill to check if it is real. Three years on into this practice, though no one told me what I should do, I stopped teaching. I stopped most of piano activities. I let go of that piano-self, the only self I've known. Not that I would recommend this sort of thing to others. In my case after hearing to UG, piano just could not stay.

A barrage of odd jobs followed. 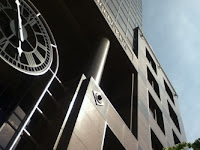 One week I was without any cash after having paid rent and bills. The next paycheck was several days away. With 50c in my pocket, I went to the store to get a banana. Upon exiting the store I saw a sealed cold gallon of milk, standing right by the door on the street side. I waited. No-one came. I took the milk. Now looking back I call it Brahman's Milk! This - after being able to afford two cars, a luxury apartment in Kirkland, pleasure trips etc. I was a self-made pauper, and was aware of it. But I never once thought of going back to piano or teaching. Since that time objects started to appear in a strange way, or come into view at just the moment of corresponding thought appearing - as if there is a person there responding to me.

At 49, I had my own ‘calamity’ in the form of advanced cancer. But because I was already out of dualistic thinking patterns, I treated it as unreal. I didn't even realize I was that ill. It then felt like I was just a salt doll falling down the ocean. There was no more thinking - and yet I was still there. I thanked the cancer for showing me the depth of that ocean...It was right after that I started getting rapidly much better to everyone's shock and surprise.

About a week before I saw Ramesam’s Video “You are Brahman," I was in a strange state.

I kept asking myself: if I am here and I go over there, did I go over there? No, because when I am over there, in that "over there," I will still be “here.”  So I cannot really stay ‘here,’ go over ‘there’ and from ‘here’ say to myself - I am over ‘there.’  I can never be "over there" and look at myself from ‘here.’ So I am only and always “here.” Then how come I can also go over there at the same time? That is like I am already there, waiting for me to go there, and meeting myself that is coming there. That means that “I” am some sort of a ‘space’ that is here, there and everywhere. And these hundreds of spatial and time coincidences I have been witnessing for some time in bewilderment  fell somewhat into this "I am a space" formula. I am a place I said to myself, and was done.

One day coming home I was stopped in my tracks with the "You are Brahman" video. As I was watching it, Ramesam was describing exactly the processes that were happening and I have been trying to get my mind around for several years. "That's IT" I said to myself.

For you to realize how deeply unfamiliar I am with Brahman discussions outwardly - I only heard the name Brahman from Ramesam's video. I never ever heard what satsang meant until now. I only listened to UG and was deaf to everyone else until Ramesam came into view.

Tears came down spontaneously. It was like there was UG Krishnamurti in the beginning of being instructed from within, putting UG there, next to one's heart, and closing all other venues of influence. And now this video saying “You are Brahman” after an incubation of about 11 years. I didn't know of Brahman, because I never heard UG using this word in his interviews. I did never aim at being “brahman.” That’s why I say my story is certainly up the Creek with no canoe.

***
I am of the view that there is no thought and no mind separate from the body. It is one whole process. And the body consists of just diamond-like eternal structure, completely symmetrical, completely objective. That's THE BODY. This structure has a way to squeeze impurities out of itself – a mechanism of nature. I don't know more. But the direct experience of the diamond structure is very clear, in hundreds of incidences, I lost count. It is funny that UG never talked about such things, and they appeared in my life without warning.

For example, the other day "I" thought of going out and getting a white paper for the printer. "I" is going to a Safeway store. On the way suddenly it sees a posh car.  The car is making lots of noise, and as "I" is looking on, the car makes an unauthorized U-turn, goes into a parking lot in front of 7/11 store that "I" is passing by at that moment. The car begins to park facing the "I" whereas all other cars are parked the opposite way.

"I" proceeds to its Safeway destination. On its way "I" thinks, "I should also get a candle wick, and Safeway won't have it, but the Rite Aid might". "I" heads in another direction, enters Rite Aid store, searches for candle wick, does not find it, takes some white printing paper and the cashier at the register says the total to be paid is $7.11.

I that wanted something, went somewhere, changed its mind – it was like surfing through symmetrical structure of some sort . At no point in this occurrence a preplanned ‘thinking’ can be pinned on me. Was 7/11 and $7.11 just waiting out there on the street for me to come and check it out? "I" doesn't even come into it.

A more recent example is what happened when I went for a walk after attending to some e-mail correspondence with Ramesam. I found a white paper lying on the sidewalk with the word "Free". I liked the word. I picked it up, put it in my purse. After some time I am returning home, and a bus, an empty bus, suddenly stops as I happen to pass by the bus shelter. A friendly driver offers a ride, says “I am going this way anyway, and it is the end of my shift. The ride is Free.”

I think at that moment:  "This is a new one. After a lifetime of waiting for the bus, running after the bus, collecting the right fare for the bus, being in over-crowded buses, especially in my years in Russia, as there were not too many cars back then, suddenly here is the bus, just for me, and I didn't have to wait for it, I didn't do anything. And it is Free!  It was then I remember the paper with the word "Free" in my purse.

I decided to make a mala the other day,  gave it to my son. In the next few days his girlfriend is finding a new job position, her new boss's name is Mala. It goes on and on here. Drawn with one pencil-all the way through. All-pervasive. 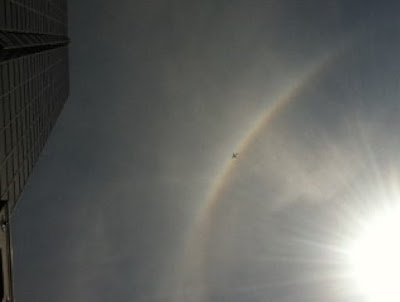 Posted by Ramesam Vemuri at 5:00 AM 8 comments: