The Two Courses to Advaitic Truth - 1

The Two Courses to Advaitic Truth - 1 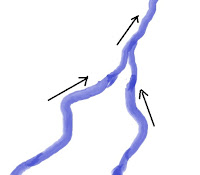 There appear to be two distinct courses which a seeker may take, metaphorically speaking, on the journey upstream to find his/her Source - i.e. the Ultimate Non-dual understanding (Advaitic Truth) that says there is neither a seeker, nor a source to reach; neither a movement nor even a path to tread on. All is "What-Is" as IS right here and now at this moment.  I would like to call one as the "Religious stream" and the other as the "Philosophical or Analytic stream." The distinction between the two paths, though broadly apparent from a distance, could appear to be pretty hazy and porous or fading at the edges when looked at closely or under a lens. It may be easy to discern the differences between the two streams if I describe the broad characteristics, practices, and the geographic spread in their popularity. One may not fail to notice the distinguishing shades between the two routes, perchance, if I provide some names of their most prominent preceptors, as type examples.

Those people who take the route to Advaita with a strong base in religious thought, go by the belief-structures that their religion demands.

It is not difficult to surmise that ever since the “modern man,” Homo sapiens sapiens, discovered in the good old times the advantages of group-living and learnt the dynamics of managing interrelationships and also realized his capability for abstract thinking, religion played a pivotal role in the development of his life and activities.  It  helped  to evolve conceptual schema which in turn contributed to establishing a mature and harmonious society. It didn’t matter whether it was a tribal society or a nomadic one, religion served as a binding force for the group-members. It was looked upon as the arbiter of justice within the society. It was the stipulator of the prescriptive norms that specified the acceptable code of conduct to be followed in living the daily life by each member of that group.

Comparable to the concept of ‘allegiance to a written or unwritten constitution’ in the modern day nation states, religion acted in the distant past as the ultimate authority to be loyal to. It was their symbol even to die for. It provided a purpose for life. Unquestioning belief in the concepts promoted by that religion and also a formidable faith in a supervising Godhead that would police the acts and dispense justice formed the most crucial (and necessary) components of a religious framework. For example, an ‘Astika’ is defined as one who has firstly an unquestionable allegiance to Vedas, secondly believes in the existence of other-worldly experiences, and thirdly, subscribes to the doctrine of rebirth. The concept of rebirth, where it is present, is strongly shaped by the other 'religious belief structures’ within that particular society.

Whatever it is, 'Rebirth' as a 'reward and punishment' mechanism remained very useful in the repertoire of tools for the maintenance and guaranteed management of a secure and harmonious society. It became a very successful and irreplaceable ‘meme.’ Let me quote here what I wrote in an essay in 2004 regarding the functional value of a Godhead in a religion:

“... ... instead of having an external enforcer of the regulations constantly monitoring the behavior of the individuals, self-regulation increases the total efficiency of the system. A Godhead is a policeman internalized within each individual to ensure, through self-regulation, a behavior that is in line with the designed objective of overall welfare, comfort and well-being of not only the individual, the whole society but also the total environment.”

But the important question has to be to what should an inquirer’s loyalty be? For an honest inquiry, it cannot be to the form in which or how the Ultimate Truth is expressed but to the Essence of the Truth.


Can there be then a conflict between two individuals who have a clear understanding of the Truth?


Wishing All Our Readers

Seasons Greetings and
Best Wishes For a Happy And ProsperousNew Year
Posted by Ramesam Vemuri at 6:00 AM 3 comments: