The Art of Seeking by Javier

The Art of Seeking
By Javier
[Javier was born in Spain and now lives in Holland. A decade and half ago when he was in his late teens, he was leaden with a sense of heavy confusion – a confusion that had driven him to find a way to attain eternal happiness.  Now in his thirties, he finds from his quest that 'enlightenment' seems to be an ongoing process by ‘no-one.’  Over time he realized more glimpses of this Truth while the subtle layers of the I/ego/doer are dying day by day.

I am grateful to Javier who has been kind to share at this Blog the process of his own ‘search’.  The Reality Check he offers reads like true Meditation.  Javier will be happy to receive any comments or questions and is available at:  O_zean@hotmail.com  -- ramesam]
The Art of Seeking
by Javier

“Time is ticking.  Fast, hurry, seek what you are trying to find!”


That is what I said to myself when my seeking hit the roof. I had to do something in order to achieve enlightenment.

It all started when I was 18 years. I started doing meditation after listening to a new age program on the Dutch radio station. I am 33 now and I did not know anything about enlightenment or spirituality or whatever you want to name it. So there I was, meditating for 5 minutes each day. Thoughts were all over the place, scattered as if they came from a bombshell. I read about Buddhism online and I did not understand anything about what they said.

I didn't know anything about God/Brahman/Life itself. I was never a believer in the catholic God and thought going to church was kind of ignorance.
Going to heaven after I die? Was it my fault that I was born?
So I turned on the TV one night and Osho (an Indian mystic) said the following words 'you are not the doer, you are a watcher'. This trying to figure out who the doer was started right there that night.

So time flew but enlightenment and Self realization did not make any sense. When I was 27 or so, I typed the question on Google “who am I?”  I came to an advaita site of Ramana Maharshi. It sounded good to me. As I went to YouTube, I found other advaita/non-duality teachers talk about it. When I listened to Tony Parsons saying 'everything just happens for no one', something clicked. Surely, hearing, smelling and feeling were happening on their own accord. If ever enlightenment was that easy! I couldn't believe it. I thought I had it. I thought that it happened to someone.
Darkness, separation and no Brahman/Source/Life to be found anywhere!
Help! I saw myself as a separate doer, doing stuff in life, not knowing that that very thought of being a doer also was just perfectly happening on its own accord. SO I believed in this whole seeking mind game and all of its diverse thoughts. One day the mind started to talk in the 'you' form. So I wondered. Are there two separate selves?

But very recently things started to change. I had glimpses. They went away as fast as they came. I should be happy knowing that I was enlightened. I had it in my hands! I finally arrived.

Who is it that becomes enlightened?

Who is it that wants to get rid of the doer?

Who is it that seeks?

Isn't it so that all of these divine things are also happening perfectly?

So yes, writing this post is happening on by itself. And there is something still 'knowing' that it happens that doesn't require effort and pain. It is there.

This/Life itself is a knowing which knows:

- itching sensation on my left leg
- deep inhalation
- sounds
- tapping
- legs crossed on the ground
-coldness on the nose
- a thought saying ' if there is no one, who or better say what knows that this very thought is happening' 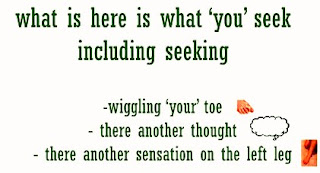 - smile
- humming of the PC
- moistening of lips
- blinking
- another thought saying why I wasn't aware of the blinking before
- laughter
- another thought saying that there is a noticing/ knowing that knows that I wasn't aware if there is an I!
So all of these things seem to happen and the ‘you’ cannot figure out this doership. You cannot surrender either or let go. It happens or not. In my case seeking was an obsession, like a day-job. The pre-thought 'I am going to wiggle my toe whenever I want' was my seeking experiment for 2 years but step by step in the story of Javier (if there is a step by step), there was an understanding that subtle actions were happening too, including concentration, sending imaginary signals to the toe, closing the eyes and forcing it to move the toe. Hilarious really but just OK. So there seems to be a process here NOW of dismantling subtle layers of belief and subtle thoughts of identification. So self inquiry into the doership can be the way. Or more correctly, there is no way ... there is only 'waying' by no one.

Life is living you. You are not having a Life. Of course, don't say this to an apparent anyone who believes they are separate. 'You' might end up in a separate isolation room!

It couldn't have happened in another way. So trust what you know or don't know. It is one big paradox!
Posted by Ramesam Vemuri at 8:02 PM

I divide man into two categories;1. the Self, which represents man as a physical, mental, and social being, and 2. the Knowing-Self, which represents man as a moral, and spiritual being. In the context of human existence, the Knowing-Self does not know the reality; the reality of planet Earth's Angular Speed, and Linear Speed.The Physical Reality of man's Subjective Existence is possible because of the lack of perception, cognition, or direct sense experience of Earth's motions. The future gets transformed into the past in an instant and the present moment becomes past before man has awareness of the present moment. Man lives and exists because of the powerful, protective influence of ILLUSION. If man has direct experience; mental, sensory, or physical experience of earth's speed and rotation, he can not survive even for a second. What man experiences is a change in his environment that causes alternating periods of light and darkness while the Sun, the source of Light is shining with brightness all the time.

Watching the Dalai Lama interviewed, I realized you cannot 'blink and think' at the same time. Further research showed that a scientist agrees! And that some Tibetan lamas use voluntary blinks to break out of thought loops.
www.raysender.com/blink.html